IT DON’T MEAN NUTHIN’
A player or manager who leaves a club under acrimonious circumstances then comes back and wins the game and/or scores a goal.

KNOWN TO THE AUTHORITIES
Simply, a player who scores and has been convicted of any offence. An increasingly popular category – but then again, what do you expect to happen giving a teenager an infinite amount of money to spend on booze, drugs and the pleasures of the flesh…

REVERSE CHURCHILL
A rousing half-time speech that sees a team leading at the interval, slump to defeat. Generally, this is from a clueless recently-retired player who will relegate his new club and then join ITV…

PAGGA!
Football brawl. To qualify, at least one player from each side (and not both from the same, unlike the unfortunate picture shown here!) needs to be dismissed for violent conduct at the same time. Usually accompanied by the phrase “A wee bit of silliness”…

WHERE’S RUSSELL MARTIN?
Named after the Norwich City player, who, along with his team-mates, reimbursed 899 fans who travelled to see the Canaries crash to a 3-0 defeat. Also known as the Unrewarding Away Trip. Distances used to be independently verified *HERE* but now we lazily use Google maps instead.

LOCAL BOY MAKES GOOD
In days of yore, many players were known by the pseudonym ‘A Trialist’. Now that such things no longer exist, there is many an exotically-named player to be found in the lower leagues. For the purposes of the Head In Hands League, this is anyone from League 2 or below in either England or Scotland.

DAY TRIP TO BRIGHTON
Could be known also as a Tommy Hutchison, scorer in the 1981 FA Cup final for both Manchester City AND Tottenham Hotspur. Basically, a player scoring at both ends. Named in ‘honour’ of Britain’s LGBTQ+ capital. That’s Lesbian Gay Bisexual Transgender Queer for acronym fans out there…

MAKE YA MA PROUD
For a disastrous début, e.g. scoring an own goal and/or a sending off on your debut. May also be called a Maximilian Hoffman, after the teenager whose debut lasted a whole 90 seconds after giving away a penalty and getting a straight red card. 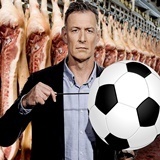 SUTTON’S WALL OF MEAT
For a solid defensive display and named after a comment Chris made during the recent Euro 2020 championship about Turkey’s players being like a wall of meat in trying to keep the Italians out: “Turkey are a big, physical team and it looks like they’re playing five at the back. Italy will have to get past that wall of meat if they’re to win the game”.

…AND STAY OUT!
Player who is such a flop that they are exiled to the furthest possible club. Rather as if a Plymouth player was sent out to Inverness Caledonian Thistle, and the manager was so keen to get rid that he drove the player there himself. With the player hog-tied and blindfolded in the boot.

FRESH HELL
Recipe: Take one Combustible Manager, add a dash of Poor Performance in a game you should be winning, and stir. Check at half-time, but for best results, wait for the the full 90 minutes. And DON’T linger in the tunnel if a man with wire-wool for hair is approaching you at speed…

THE CLARIDGE CLOCK
Replaces We’ll Meet Again. Named after the journeyman ex-pro turned TV pundit, it is for a player who has had a long list of clubs during his career. For the sake of argument, we will say a list of 10 former clubs or over…

UNPLEASANT LOCAL DERBY
A local derby between two towns or districts that would be deemed to be ‘unpleasant’. Likely never to be shown on Sky unless there is bribery and/or contractual obligation involved. Thought to have derived from seeing Bury v Accrington Stanley on the fixture lists.

DIAMOND LIGHTS
Name after Glenn & Chris’ epic anthem. It reached number 12 in the charts in April 1987. So now you know. This category is for footballers who share their name with a musician. Or maybe they’re one and the same…?

ARE YOU MY FAG?
For goalscorers with double-barrelled surnames who have to do something between terms at Eton. Further probing reveals this to have been a quote from the 1968 film “If…” starring perennial cinema villain Malcolm McDowell.

DARWINISM IN ACTION
When a club from the top of the league dispenses a harsh beating to a club either at the bottom of the table or to a team from a lower division. The law of natural selection, as advocated by naturalist and beard enthusiast Charles Darwin. As it should be.

DON’T CALL ME SHIRLEY!
This is a simple one to explain – basically this is a footballer (generally, ‘a big lad’) who has a girl’s name. See, for example, Lilian Thuram (but don’t say that we said so, ok?).

AN EVENING WITH PAUL ROBINSON
Named after the former England goalkeeper’s sleep-inducing appearance on Soccer Saturday. This category is for a bore-draw where there are less than 5 shots on goal in the entire game.

BORN INTO BURBERRY
Now The Jeremy Kyle show has been cancelled, these people hang around in cheap bars and the dodgier parts of town, and are epitomised by their style-icon Dappy. This is for chav names such as Kortney, Chelsey, Kaiyne and the like…

OLD SCHOOL
This an anti version of the above category. One for those who might tap their pipe out and quaff a milk stout whlst playing dominoes. That’s a man’s game, that is.

YOU’RE NOT A KID ANYMORE
A category for all the Mattys, Stevies, Jamies out there (mainly Mattys). Most people grow out of this over time, but not this lot…

IS IT CUP WEEK?
Can you believe your team is playing THEM? This is for a match between two teams unthinkable a few seasons ago, but one side has dropped like a stone, and the other has risen like Lazarus (the biblical character, not the resident vagrant from Sheffield city centre)…

CATEGORY WITHOUT A NAME
We thought about it, thought some more…and gave up. This is when a player scores, then gets sent off later on in the game. AKA ‘Getting A Bit Excited’ or ‘Having An Eventful Game’. New for the 2019/20 season.

THE TRAVEL PAGES
In any newspaper there are usually a few pages of cheap holiday adverts placed after all the main news at the back of the paper. So, a team that has gotten so far behind everyone else, can be said to be on the travel pages. For HIH purposes, any team 15 points from safety by the day after new year’s day is appearing besides the Hoseasons ads.

THE DREAD HAND OF BARNEY
Three in-form scorers are cursed for the day by Barney, and their previous streak comes to a shuddering halt. It’s the curse, the curse…

ZINGER
A particularly bad Whiteley-esque pun made by one of us at the time. If only Wiggy was listening…or maybe his spies are close by, noting down new material for Soccer Saturday…

THE GUB SCALE
Predicting if a team will be on the end of a ‘gubbing’. See the separate page for further information.

WHERE’S ALF INGE?
Also known as the Unrewarding Away Trip. Named after Alf Inge Haaland, who allegedly paid for some stranded football fans to get home – although I can find no evidence of this currently, so if you’re out there, Alf… Replaced by Where’s Russell Martin?

BENDTNER!
Named after the Danish ex-Arsenal “striker”, and used for a forward who manages to get a goal about as often as Halley’s comet comes round. Was almost re-named a Berahino, but no one has failed at every level like Nicklas.

WE’LL MEET AGAIN…….don’t know where…don’t know whennnnnn…. er – was a category used for when two veteran strikers scored. Too difficult to prove, so this has had to be retired. Replaced by the Claridge Clock.

FIGHTING LIKE BEAVERS
Rather like a reverse-Reverse Churchill. A team who is losing badly at half-time recovers against the odds to claim victory. Inspired by Mr Unbelievable himself, Chris Kamara –  CLICK LINK

LIVE FROM THE PHONE BOX
Also known as “60p?!?!?” after the outrageous minimum charge for calls from BT callboxes. Used for when a reporter calls in a report that sounds like he is having to use said box. Generally occurs during early rounds of the Cup. Retired because too few pubs have Wiggy PLUS sound. Sadly.

CAVENDISH TO WIGGY
The Cavendish is the main venue for the Head in Hands League. Wiggy is our nickname for Sky Presenter and 2nd-best-ever Countdown Host, Jeff Stelling (the jet-black hair that never moves MUST be a wig!). The category is used if Jeff or any other panellist repeat a gag or fact we have just said. Sometimes the link appears to be telepathic…

LAW FIRM
Having a category of Two First Names proved to be impractical, as there are genuinely more than you’d think. So here’s this – for players with names that sound like two surnames put together

HURRICANE GWYNNE!!!!
A force so strong it needed four exclamation marks. John Gwynne, SKY football and darts commentator, and, we believe, lover of pies, has a voice SO STRONG WHEN HE GETS EXCITED!!!!…that it can blow the listeners (and panellists) away. Ground Zero is likely to be somewhere in a Lancashire pie-shop.

HE SH*TS GOALS
Three in-form goal scorers are chosen by Barney. This, naturally enough, ensures that they then could not hit a barn door with a banjo. Or even with David Banjo…

CORPORATE SHILL
*NEW* FOR 2018! A chance to highlight some of the sterling (sterling as in pounds sterling) work done by our goalscorers in the name of acquiring yet more moolah. Retired after the 2020/21 season (our season 8).

KENNY DAVIS’ OYSTER CARD
Named in honour of a player who steadfastly refuses to move out of his local area. We define this as someone who has had at least 3 clubs within roughly a 30 mile radius.